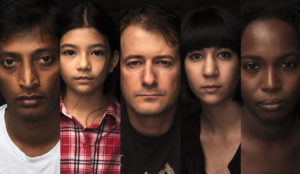 Not long ago, I saw and heard (on television) the anguished yet determined report of a mother whose soldier-son was killed in a far-off ambush in Afghanistan. The news media, which drowns us with equal parts information and hyperbole, was trying to extract a statement from her—a woman reeling from fresh grief—about whether or not the current president had phoned her. (He hadn’t.)

We absolutely do not feel personally safe in the current national environment.

With painful dignity and uncommon nobility, this poor lady simply stated: “I don’t care if I hear from the White House or not. I just want my son to be remembered.” And she pronounced his name out loud, her trembling voice a slab of quiet strength and fortitude. It was yet another of the million saddening dispatches we’ve been suffering in this grim year of 2020. (I personally could have lived without the 21st century, which began with 9/11 and now drowns us with a pandemic and the worst spectacle of federal leadership in the history of this republic.)

We absolutely do not feel personally safe in the current national environment. And a horrifying number are frightfully sick while an explicable number are losing their lives. We have both viral illness and viral racial injustice–they have eerily converged into an uncommon veil of American disease, distrust, disavowal–but, yes, hope. We the people, the authentic American body-psyche, have become the default leadership of our complex nation. Knowing that we’ve been forgotten, many of us have decided to remember what principles this country telegraphed when we threw off the shackles of royal colonialism. And we the people (some of us, anyway) have picked up on the social hypocrisies of the same men who pronounced justice and equality for all yet heedlessly continued to enslave millions of forcefully imported black people. COVID-19 notwithstanding, we regular Americans have decided to become the vaccine for this systemic dehumanization of a proud and noble race descended from African splendor.

We working Americans, befuddled by governmental bureaucracy and incapacity, scraping for wages and the jobs themselves, gripping with the fears of pensions drying up or simply being filched, are grappling with profound anguish. We often dance with desperation–becoming cynical, but not resigned, to the entrenched ineptitude of too many elected officials. We have become unhappily accustomed to their disingenuous patterns of speech and behavior. At ground level, there is no trust. Not even their elected concern for our health and safety.

I walk among my fellow citizens of all colors, creeds, and moderate economic categories in the non-effete city of Oceanside, California. They are out and about, many wearing masks, looking for affordable gasoline, grabbing groceries, seeking non-robotized, more personal services for their home and personal needs, stealing a few weekend moments at the public beaches and parks. There is a prevailing sense of loneliness out there—we don’t expect our streets to be paved smooth, our mail to be delivered on time, and we are burdened with mixed feelings about our police officers. There is hectoring and bile coming at us nonstop from our national leadership. Bickering among them that recalls children throwing their toys at each other. The ground is not secure under our feet.

So I think a lot about the street sweepers, the grocery clerks, the fire fighters, the school teachers, and the emergency room nurses. They live in simple houses and generally evoke more decency than the entire crew occupying the White House. Many still raised a flag on Independence Day across their unassuming porches and then tried to pay their taxes on time for services they find hard to recognize. The harder they work, the harder life treats them in a land so afflicted with civil negligence.

We’ve gotten used to all of this and it does not avail us. Clearly, it should not be alleviated by any violence. Especially against innocent street protesters exercising their constitutional right to peaceful assembly. And it does not appear to be totally solvable through the democratic process for now because too many of our elected leaders are feckless. So what do we do?

We do not settle for it. We look out for each other. We actually go over, maintaining social distance, and discover who our neighbors are and what they do for a living. We say hello, even while masked, to every person who passes us by on our walks or runs. We linger in conversations because there is nothing worse than loneliness. We let that guy into our lane as we drive along and we wave friendship in his direction. We call our kids and our friends for no reason other than find out how they are. We make a covenant to help at least one person along the way every single day.

Then, sooner than later, the negativism that pervades our good land will at last be Trumped. And then the healing will slowly ensue–in all categories.